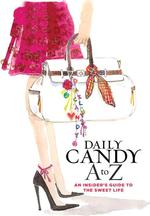 I always seem to have trouble, to begin with, deciding what exactly books of this kind are supposed to be. Are they activity books, full of quizzes encouraging profound introspection i.e., whether you are going to hell pending an assessment of your shoes? Are they glorified teeny-bopper magazines for adults—assuming adults are only interested in shopping, landing a man, and hairstyles? Are they Zagat’s guides dumbed down to include the best possible way to cover up (horror of horrors) a zit, along side the best places to shop for hats and hand cream? After reading it, I have come to the conclusion that Daily Candy A to Z may be all three.

Originally a website offering a daily email service about the goings on in the city, Daily Candy in print form underwent no change in format. Shopping, dating, decorating, and mating are all covered between its covers. Like the website, the book is decorated with colorful illustrations of candy and puppies and women in sunglasses and heels. Some tips in both the website and the book are useful and inventive, but the frustration for this reader lay in sifting through the prattle to get to the sporadically appearing golden nuggets.

While it seems part of an ingenious ploy to strengthen the ever high grossing bond between women and their insecurities, Daily Candy goes one step further by posing as “smart” book, one that discusses religion and literature, and seems to encourage women to be worldly and ambitious. This attitude is in constant conflict with the book’s other, more prevalent agenda, which is to pique women’s interest with fashion tips and blind date etiquette. The opening chapter, titled ‘A is for Appearance,’ illustrates one such conflict. While it focuses on, well, appearance, the chapter is followed by an afterthought that reads, “Appearances are just that—surface qualities that may please and delight, but are far from the whole story.”

There is a constant disparity in Daily Candy A to Z between highbrow vocabulary and fluffy content. Yes, it blurbs about Buddhism, but it also contains tips on how to deal with “fat days.” I suppose I wouldn’t have a problem with this type of frivolity if ever Daily Candy, or media of its kind, was aimed at men, but one would be hard pressed to find a book full of doodles and quizzes and quips about diets that would be enjoyed by Tom, Dick or even Harry.

The fact remains though, that a book like this has its audience, and yes, dare I say it, its merits. Clearly clever, the writers do deal with issues that many women, under societal duress or not, face daily. Doubtless Daily Candy A to Z is beloved by most of its readers, and perhaps, when one accepts this book for what it is, candy, one can appreciate its sweetness…as long as that one isn’t me.